What is this about?

When registering a service provider's (SP) metadata, the Site Administrator or Delegated Administrator can indicate support for specific encryption method(s) when processing encrypted SAML assertions and messages. The options are:

AES-128-CBC - Advanced Encryption Standard Cipher Block Chaining, also known as a “block cipher”. AES-CBC is widely supported and often the default among SAML software. However, AES-CBC has known security flaws and is vulnerable to attack such as a padding oracles attack.

What do I need to do?

See: Why should I make this selection?

2. Sign in to Federation Manager. Check the box(es) next to the ciphers you support 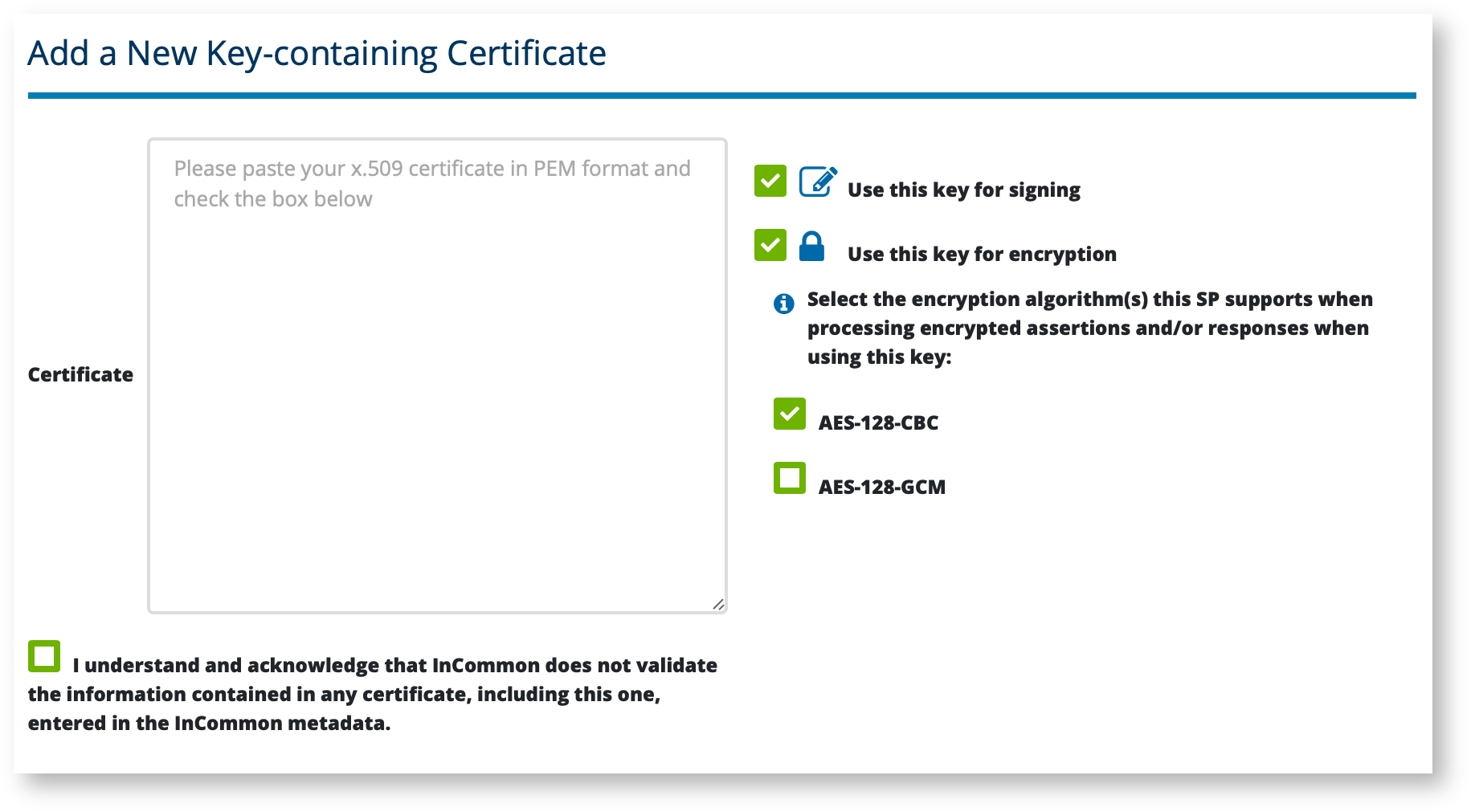 Why should I make this selection?

AES-128-CBC, the popular and often default encryption method, has known security vulnerabilities. The InCommon community needs to transition to AES-128-GCM to keep user data safe. Shibboleth, the most popular IdP software deployed in higher education, has announced that it is defaulting to AES-128-GCM as its SAML message encryption cipher starting with Shibboleth 4.

Making this selection in your SP metadata lets the IdP know which method(s) your SP supports. Doing so allows the IdP to choose the most secure option when issuing an encrypted SAML assertion/message to your SP.

A word about your SP metadata's default setting during transition

When InCommon introduces SP encryption method signaling support, if your SP supports encryption, the AES-128-CBC checkbox is checked by default. The corresponding SAML metadata element indicating AES-128-CBC support is added to your SP metadata when the metadata is published. We are doing so because because we believe that all current InCommon-registered SP's indicating support for encrypted SAML assertions and/or messages already support AES-128-CBC.

Decision: should I support both encryption methods?

What happens if I do not check any of the encryption methods?

(and why I might want to uncheck all boxes?)

It is conceivable that some IdP products may not parse the <EncryptionMethod> SAML metadata element correctly. If you encounter this problem, consider unchecking both checkboxes as a workaround to maintain compatibility.

What does signaling supported encryption methods do?

When uploading an encryption key to an SP metadata, checking the box next to an encryption method adds an additional SAML metadata <EncryptionMethod> element. It signals to an identity provider (IdP) that this SP can decrypt SAML messages encrypted using the checked encryption method.