Skip to end of metadata Go to start of metadata
Before continuing you should first understand Registry people types. You may also wish to review Registry Enrollment (Rev 2, Registry 0.9.4 and later).

Enrollment refers to the process of bringing new person records into the Registry. There are multiple ways to do this, but in the end the result is the same: a new set of attributes about the person is recorded in the Registry. Invitation is the default type of enrollment.

Enrollment Flows can be used to customize the enrollment process. Enrollment flows can also add additional Organizational Identities or CO Person Roles to an existing CO Person, through some form of identity matching. The execution of an enrollment flow results in the creation of a Petition, an artifact that tracks the enrollment and becomes an historical record once enrollment is completed. For day to day purposes, petition attributes are copied to operational records, which are editable via the web and REST interfaces.

The following participants are involved in enrollment:

Linking refers to the management of links between existing Organizational Identities and CO Person records. Linking can happen automatically as part of an enrollment process, as described below. However, a CO Administrator can also manually adjust these links, usually to resolve enrollment issues.

Registry will attempt to automatically link records during enrollment. This can happen under a variety of circumstances.

If an Enrollment Flow is configured with Authentication Required and Require Confirmation of Email, then the identifier of the currently authenticated user will be collected and attached to the Petition in progress. This identifier will be checked against existing Organizational Identities and an appropriate action taken:

If an Enrollment Flow is configured with Identity Matching set to Self, then the enrollment is automatically attached to the currently authenticated CO Person. This is typically used for account linking (adding an additional Organizational Identity) or additional Role enrollment. 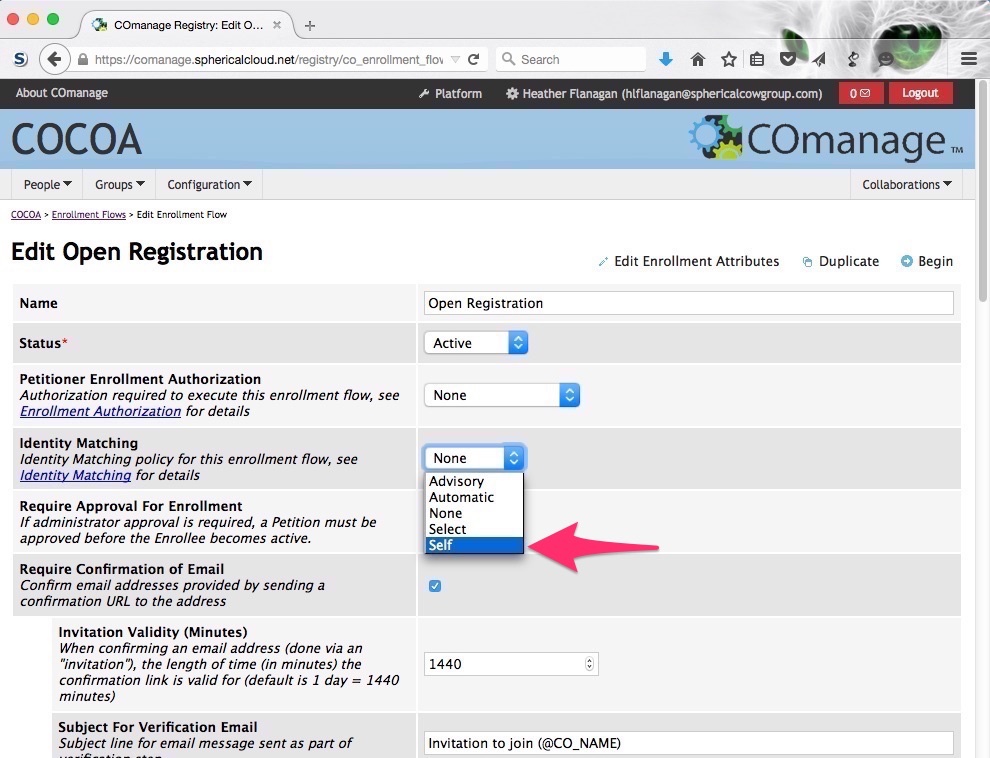 Organizational Identity Sources attached to an Enrollment Flow via Enrollment Sources can cause Registry Pipelines to be executed, which can result in automatic linking of records.

There are several ways to process an enrollment for an additional role for an already existing CO Person.