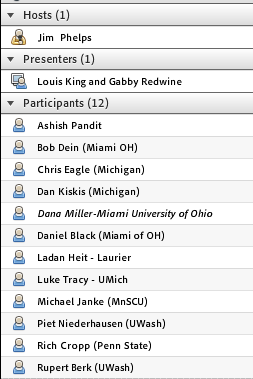 From the Adobe Connect whiteboard:

From the Adobe Connect chat window:

Chris Eagle (Michigan): i'm not really here. Trying to do 2 meetings at the same time, but the other one has priority

Piet Niederhausen (UWash): For anyone who would like to scribe ... here are the last call's minutes as a template: https://spaces.at.internet2.edu/display/itana/2016-05-20+Minutes

Piet Niederhausen (UWash): The materials that will be referred to are here: https://yale.app.box.com/s/s0lsdvptzw9n2pu3rrdey4mhjp3kvxrv

Jim Phelps: How many of you have been through MOT ITLP or a campus version of it? (We have a Leadership Development Program here at UW that is based on MOR ITLP)

Jim Phelps: This is a common pattern that I find myself in: I'm a strong facilitator but I also have a role where I'm a SME and need to have a voice at the table. I've had to either partner to find another facilitator or "switch hats" in the room and say, "I'm putting on my EA hat now..."

Jim Phelps: THat is an interesting flip of the SWOT to be OT first

Piet Niederhausen (UWash): I think that's a key observation -- you were dealing with a large complex problem space, and the initial group was invaluable for setting context and direction, but another group needed to work on the next level of detail down.

Jim Phelps: That is an interesting separation between Tactics and Strategy. The strategy set the future state goals. The tactics are next steps towards those goals.

Piet Niederhausen (UWash): Great observation about letting thinking happen before writing ... to me this also reflects different roles and skill sets that need to be involved at different points for the whole effort to be effective.

Piet Niederhausen (UWash): Great collaboration and joint presentation! Thank you so much!