Grouper and Signet are products of the Internet2 Middleware Initiative that embody part of a distributed authority management infrastructure. Grouper manages groups and memberships in a database called the Groups Registry. Signet manages privileges in a database called the Privileges Registry. Both tools rely on a technology called the Subject API to integrate with existing sources of identities whose memberships or privileges are to be managed. The LDAP Provisioning Connector automates the reflection of group, membership, and permission information contained in the Groups and Privileges Registries into a site's LDAP directory service.

The following thumbnail diagram links to an illustration of the major components of this complete distributed authority management toolkit and their points of integration with a site's existing identity management system. Click on the diagram to see a full-size image. 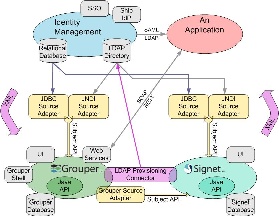 Use the following links to download ldappc or its documentation.

See the documentation link above for more information.

For versions prior to 1.2

After following instructions for testing and configuring Ldappc, you may want to make a shell script to conveniently run it. The following is a simple example:

There is no need to create scripts for version 1.2 or later because scripts are already included in the distribution.

Although Ldappc is expected to meet the needs of many deployment scenarios, it is also expected that some sites will wish to modify it to meet particular local requirements. The bundled documentation includes architectural and design documentation to help developers get oriented to the code. The code itself is available through Internet2's CVS service.

We encourage developers to discuss prospective extensions or modifications to Ldappc in the Grouper Working Group.

The source is available via CVS. See Ldappc Software Download for instructions.

JIRA - Bugs and fixes can be found here in the I2MI Common (MCO) area.