spaces.at.internet2.edu has been upgraded to Confluence 6.15.10. If you have any questions and/or concerns, please contact us at techsupport@internet2.edu 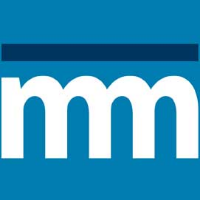 The eduroam project is a worldwide federation of RADIUS servers facilitating network access for roaming academic affiliates using IEEE 802.1x as the vehicle. eduroam's use of 802.1x in concert with RADIUS means the network is built around well-understood, established, and easy-to-manage standards which are often already deployed within the network infrastructure of educational institutions.

The goal of this documentation is to give a more complete technical explanation of the way the various components of eduroam fit together to provide a seamless authentication and user experience for users of the eduroam network.

The 802.1x authentication process is more complicated than simply exchanging credentials as alluded to above. The actual exchange between the supplicant and authenticator involves an Extensible Authentication Protocol (EAP) conversation. The EAP request is forwarded to the authentication server, generally in the form of a RADIUS request. The actual security of EAP comes from the use of SSL with one of the many EAP sub-protocols, the most common of which are listed here:

An additional option that supplicant configuration uses the so-called "outer-identity" which is passed outside of the encrypted tunnel to the authenticator and authentication servers. By default this identity is simply the username, or more often in the case of eduroam <em>username@realm</em> (such as <em>joe@example.edu</em> where "joe" is the username or "netid" and "example.com" is the so-called <em>realm</em>). Since, as we will see in the next sections, only the realm is used for routing of the request users may optionally set their outer-identity to be anything they like as long as the realm is their actual realm, and their inner-identity is configured correctly. For purposes of etiquette it is expected that if the outer-identity is not set to their inner-identity then it is set to anonymous@realm.edu. The ability to properly anonymize the authentication sequence means that intermediate authentication servers (which are very important in the next section) cannot observe and track authentication attempts of eduroam-ers using the system. 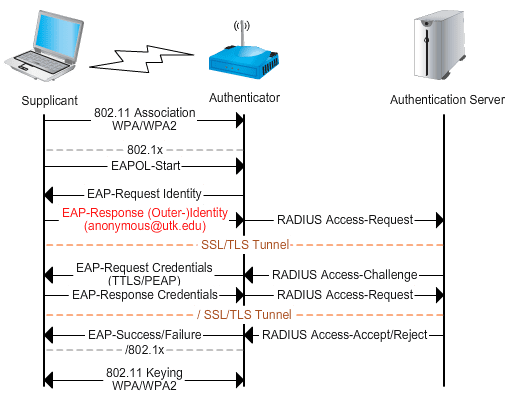 Figure 3: Authentication with 802.1x over 802.11 with an anonymous outer-identity

As discussed above, the local authentication server may not be the final destination for a given authentication request. If the realm of the user is not the local realm then the request may be forwarded to a remote RADIUS server which is authoritative for that realm, or simply knows where the request must go to be answered authoritatively. RADIUS supports this forwarding in its proxy mode as seen below. When a RADIUS request is forwarded the SSL tunnel protecting the privacy of the requestor is propagated throughout the RADIUS infrastructure, thus preventing administrators not responsible for the handling of the request from intercepting and/or manipulating the contents of the EAP exchange. The only information an intermediate RADIUS server has is the outer-identity of the requestor, the state of the EAP request (accept-request, access-challenge, access-accept, or access-reject) and any RADIUS attributes passed outside of the tunnel. 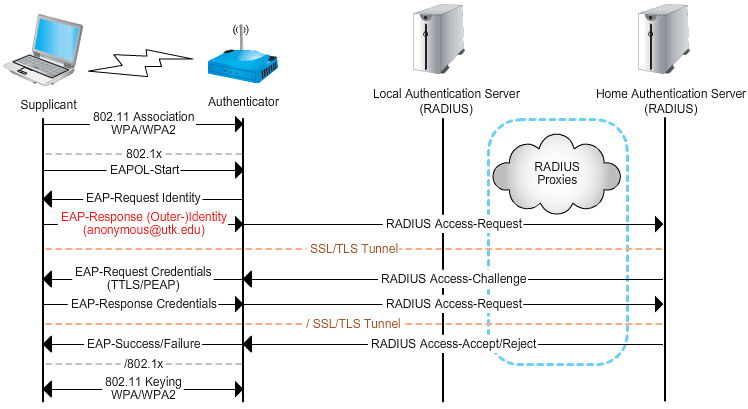 eduroam-US is authoritative for the .edu TLD, and handles routing to other TLDs including those handled by eduroam in Europe (for all European members of the federation), eduroam in the <Asia-Pacific region (including Australia, China, Hong Kong, Japan, New Zealand, and Taiwan), and eduroam in Canada</a>. Within the US the eduroam-US Top-Level RADIUS Server (TLRS) handles routing to .edu members. 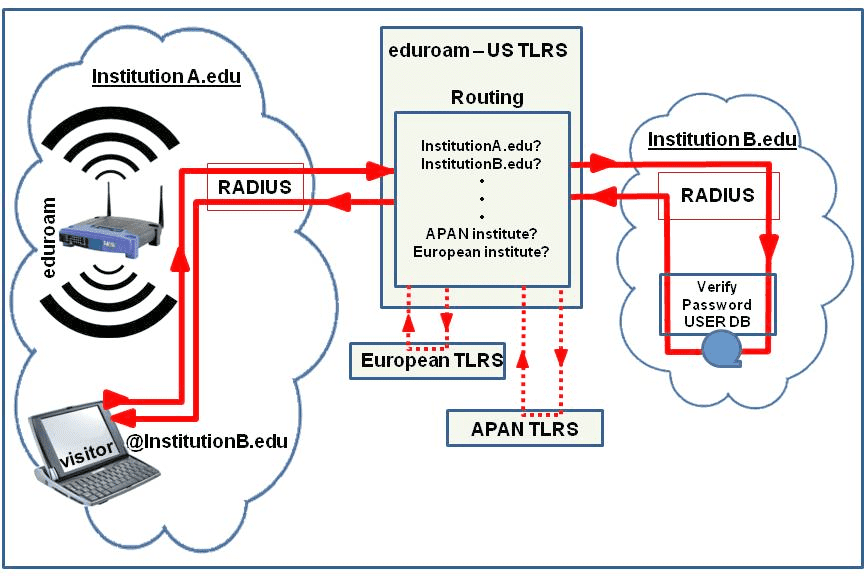 The following is a comparison of the most common EAP methods deployed in the eduroam-US ecosystem.

Works on many platforms

Supplicant - The client software on an computer associating to an 802.1x secured network. Often the computer itself (or even the user) is referred to as the supplicant but generally without ambiguity.

Authentication Server - an authentication server is a server or network appliance which is able to accept 802.1x authentication requests and respond appropriately based on credentials passed it it. It may be a server running a RADIUS server and a directory service or simply know how to forward requests to another server which is itself connected to LDAP/RADIUS. This abstraction is the strength of the 802.1x architecture.