spaces.at.internet2.edu has been upgraded to Confluence 7.11.1. If you have any questions and/or concerns, please contact us at techsupport@internet2.edu

Configuring Shibboleth Delegation for a Portal

Enhancements and extensions to the Shibboleth software, and creation of a Delegated SAML Authentication Library have enabled a delegated authentication model among SAML-enabled services. The use case motivating this development was to enable portlets in a uPortal-based portal to access back-end services on behalf of portal users via Shibboleth and this delegation model. This document will give an orientation and specific configuration guidance to deployers who wish to set up a similar environment.

We'll start with a high level review of the main components and their interactions that make delegation happen.

The delegation plug-in can be obtained at <http://svn.shibboleth.net/view/extensions/java-idp-delegation/>. It includes installation instructions in the form of a README file.

The plugin will NOT work with earlier versions.

Starting with this version, the SP software contains all of the necessary delegation-related enhancements as well as enhancements to integrate with the Delegated SAML Authentication Library. It is typically deployed in two roles in this delegation scenario: one instance protects the portal (or any user-facing web application making use of the library) and the other protects a back-end Web Service Provider (WSP).

This library extends the Apache HTTP Client (v4) in Java with an implementation of the SAML ECP profile. It is used by portlets that need delegated access to a WSP using a SAML-based delegation model. More information at https://wiki.jasig.org/display/UPM31/Delegated+Authentication+Integration+Library

This version of uPortal contains enhancements enabling it to provide Shibboleth-delivered attributes, the "delegatable" SAML assertions delivered when users login to the portal, and selected portions of the relevant IdP's metadata, for use within the portal environment. Portlets using the Delegated SAML Authentication Library must request these from the portal through the portlet API.

Note that the swimming lane labeled "SP A - Portal" sometimes refers to the Shibboleth SP itself, and sometimes to an action that uPortal takes. They are considered as one actor. The Portlet is given its own swimming lane to highlight the actions it takes. To simplify the development of delegation capability for this portal use case, it was decided that, from the SAML protocol perspective, the portlet, the portal, and SP A would be treated as a single logical security entity. 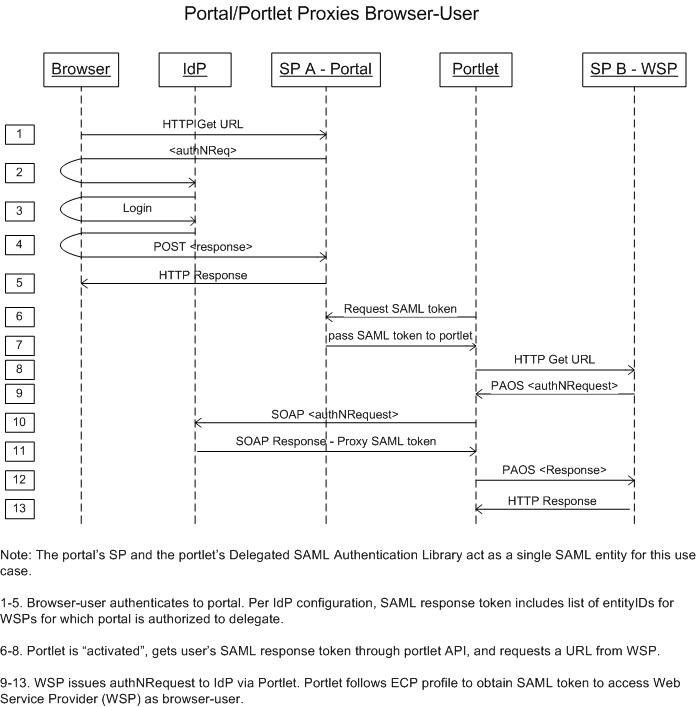 For a given IdP, Portal SP, and WSP SP, the entityIDs and public keys need to be used and shared (via metadata) consistently across all the components. Most problems will result from a failure to do this. Use this space to record their values for a particular set of entities. The section following this will refer to them by the "shell variables" defined on the left hand side below.

Each component - IdP, the Portal's SP, the Portlet, and the WSP's SP - has ordinary configuration needs unrelated to enabling delegation. A general prerequisite of the following guidance is that these are working in standard, non-delegated scenarios.

Prerequisite to these instructions, we assume that:

Configuration objectives for the IdP are:

These are by no means the only steps, as outlined in the instructions linked above, but are the primary steps involving references to the other scenario components.

The <RelyingParty> element for the Portal must have a non-standard <ProfileConfiguration> element added to enable delegation support. To allow the portal to authenticate itself as the user when relaying requests from WSPs, the allowTokenDelegation attribute must be set to "true", and a <samldel:DelegationRestriction> element for each WSP must be included. Also, for the portal use case, in which only one delegation "hop" is needed, the IdP is configured to create a proxy token that cannot itself be proxied. That's controlled with the maximumTokenDelegationChainLength attribute.

A <RelyingParty> element for each WSP must have a non-standard <ProfileConfiguration> element to enable delegation to it. To prevent it from exercising further delegated access to other services, set allowTokenDelegation to "false".

Step 5(g) of the delegation plug-in installation instructions requires a that a suitable IdP key be identified as IdPValidationOnlyCredential. It's important that this not be a new key, but the same key the IdP uses to sign the assertions it issues to the Portal SP. Typically, you use a single key for all of the IdP's needs.

The sole configuration objective for this SP is to enable it to integrate with the Delegated SAML Authentication Library used by portlets acting as delegates. There is no other delegation-specific configuration required.

Integrating uPortal with Shibboleth to support delegation centers on enabling the SP to provide the portal's Delegated SAML Authentication Library with the SAML assertion from the user's initial login, and with the IdP's public key(s) from its metadata.

SAML assertions are exposed by the SP via the mechanism described in the https://wiki.shibboleth.net/confluence/display/SHIB2/NativeSPAssertionExport topic, by enabling the exportAssertions content setting. The exportACL property of the <Sessions> element limits access to the exported assertions by IP address. This may need to be modified to suit the local environment.

The IdP's public keys are extracted from the metadata provided to the SP by configuring an <AttributeExtractor> of type="KeyDescriptor". The extracted keys are mapped to SP-cached attributes based on the signingId option on that plugin, and the metadataAttributePrefix property.

The example configuration below assumes that the default "application" configured for the SP is the Portal. It is also possible to associate these declarations with specific SP-defined applications via the usual override mechanism.

Note that the AttributeExtractor configuration above, together with the metadataAttributePrefix setting, results in the IdP's public key(s) used for authentication being placed in an SP attribute named "Meta-Signing-Keys".

Of particular note, the Portlet needs access to the private key used by the Portal's SP so it can successfully authenticate to the IdP. Here's how, excerpted from above:

The sole configuration objective for this SP is to enable it to accept delegated SAML tokens, but in this case only those presented by the Portal.

The <SessionInitiator> with type="SAML2" must have the ECP property set to "true" to enable it to interact properly with the Delegated SAML Authentication Library (because it's not a browser).

The example configuration below assumes that the default "application" configured for the SP is the WSP. It is also possible to associate these declarations with specific SP-defined applications via the usual override mechanism.

The use of match="oldest" above isn't really material. The other values of "anyOrder" and "newest" both amount to the same thing when delegation is only one tier deep. We simply need to declare one of them.

Most of the trust management issues that arise when delegation is used are the same as in more traditional cases. In each SSO interaction, the SP and IdP are assumed to have metadata about each other containing the authorized public keys to accept. During the delegation step, the Portal SP acts as the client, and the relevant SP that the IdP cares about is the WSP, and not the Portal.

By default with Shibboleth 2.x and the use of SAML 2.0, communication between the IdP and SP is now typically confined to the "front channel", meaning the browser. Direct, back-channel interaction is not usually involved. A SAML delegation scenario, though, turns an SP into a client, and requires SOAP-based messages between that SP (in this case the Portal system) and the IdP.

Because SOAP message signing is quite complex, TLS/SSL is more typically used to secure these exchanges, and in fact the current implementation assumes TLS/SSL is used in order to maintain confidentiality and ensure that assertions containing user data are sent to an authenticated IdP and not an attacker. As a result, the Delegated SAML Authentication Library also required knowledge of the IdP's public key(s) so that it can authenticate the IdP server before sending anything to it. The library is modular with respect to the source of this information, but the Portal SP software is commonly used to obtain it by utilizing the metadata it already has on hand for the IdP.

On the IdP side, TLS/SSL support is handled by the servlet container. In the case of Tomcat, it requires special configuration and adding a Shibboleth-specific library and configuration to the JRE itself. See the "Supporting SOAP Endpoints" section of this topic for details.