In early discussions with the group about how best to approach translating collected use cases for IDM services into a gap analysis and ultimately a prioritized set of design and development goals and technical requirements, a number of us expressed the concern that whatever solution or solutions arise from our collaboration be architected in a fashion that will allow for "piecewise" deployment of our solutions. Our expectation is that if we design and construct YAMIS (Yet Another Monolithic IdM Suite), most sites (who have already implemented some solutions within the IdM space) will be unable to adopt our solution, either because of political pressure to continue demonstrating benefit from prior purchase of commercial solutions or because of practical difficulties in implementing a "fork lift" replacement of the entire institutional identity infrastructure. Better, we surmise, if our solutions can be modularized, with well-defined interfaces between components that can allow individual sites to choose whether to deploy the entire OSIdM4HE suite or integrate individual components of the suite with existing solutions (potentially as a stepping-stone to replacing existing solutions with other components of the suite). The group as a whole seems committed to delivering (either through new development or through some combination of new development and integration of existing open source components) a complete IdM suite (that, itself, being a somewhat ill-defined concept for the moment) for those sites that want a top-to-bottom open source alternative, but seems agreeable to the concept of modularization.

If we're to frame the gap analysis and requirement gathering part of our Chicago discussion in terms of logical units or chunks, then, we must answer the question of what the logical units or chunks we believe should be comprised by a comprehensive IdM suite really are. That's the point of our discussion here. Each of us (Rob, Keith, Jacob, and Steven) have expressed some interest in the effort, and also some prior art in the area – some of us have intimated that we have conceptual frameworks in some degree of maturity already in mind. We'd like to use this page in the wiki to document our ideas, and perhaps stage a conference call-cum-Adobe Connect session to flesh out our ideas in preparation for Chicago the second week in August.

Any discussion of modularizing the IAM space is probably deficient if it doesn't at least tip its hat to the Educause/I2 functional diagram: 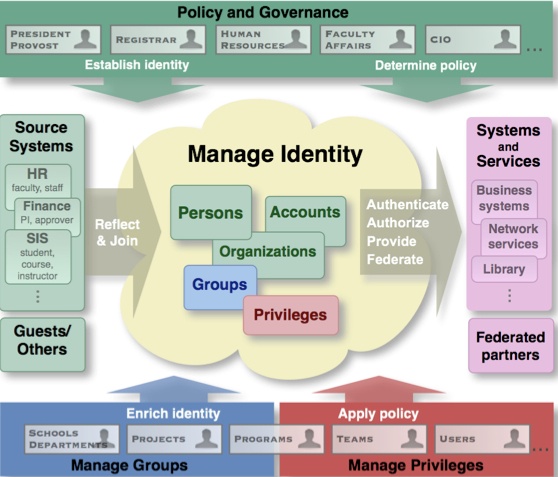 In theory, that conceptual division of tasks spans the entire IAM space and could be used directly as the basis for our discussion. It's not clear to me, at least, though, that the logical divisions which work well for discussing the functional aspects of an IAM strategy necessarily map directly onto the kinds of modular units from which a technical architecture to deliver those functional aspects can be built – I suspect there are some concepts that may need to be added into the mix to achieve a level of granularity more appropriate to our particular discussion.

We've had some good electronic discussion, both in concalls and via email, and although we differ in the specific ways we draw the boundary between what's in-scope and what's out-of-scope for the term "IDM" and somewhat in the component parts we envision that an IDM Suite needs to comprise, we're in rough agreement about a few core concepts. At an extremely high level, we seem to agree that an IDM has at least a few high-level components:

There are a handful of other items that are either in my (Rob's) own personal view of the space, or seem to be implicit in our conversations to date, and which may or may not be "in-scope" as a result:

Diagram - IDM from the consumer's perspective

To some extent, the discussion thus far (outlined above) has largely focused on the IDM suite from the perspective of the IDM itself – the discussion has been couched in terms of what services an IDM suite needs to provide or what functions it needs to fulfill. That's extremely useful, but at a very high level, I suspect there's a slightly different perspective that may be useful to consider, as well – that of an external system either consuming or integrating with the IDM suite as a data provider, provisioning endpoint, query supplicant, etc. At an extremely high level, without recourse to thinking about how the individual parts fit together, it seems as though there may be a sort of overlapping cloud diagram one might consider to represent the slightly different perspective an IDM data consumer or data provider might have on how the IDM suite functions. I'm not sure that I've got this exactly right, nor am I entirely comfortable with my own assignment of low-level features and operations to the individual clouds, but I thought this picture might be helpful, even if only as a way to prove this isn't a fruitful direction to think it...

A few notes on the diagram: