Newcastle University has now been using Grouper since 2007, with one of the first use cases being to use Grouper to manage access to the University's wiki service. The use of Grouper has grown significantly over the years, with the loading in of HR and student data vastly improving the level of delegation and access control we can now provide. Recent developments have seen us making use of Grouper's LDAPPC connector to provision groups from Grouper into the Active Directory.

Contribution from Newcastle in May 2013: Grouper InfoGraphic

The last 4 years have seen steady growth in the service and grouper is embedded as the default choice for group management and access control in the university. 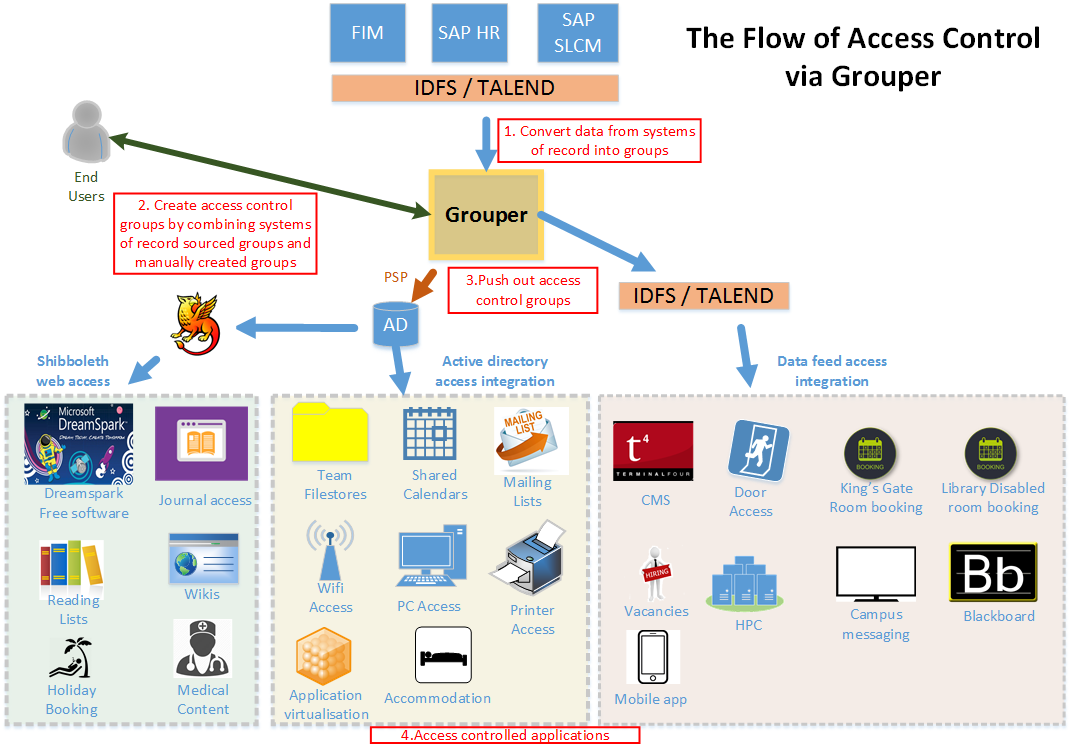 The service was recently upgraded to version 2.2.  The new functionality of real time provisioning is a welcome improvement, in particular access to team file-stores is much easier to setup and manage.

In order to give an idea of the scale grouper operates at in the university and the value  it delivers,  we have shared some service metrics.

Average number of monthly users of the service management interface: 80

Average number of monthly manual changes (i.e. done by a person) to groups: 570

The key benefit of grouper service  is that is allows the university to leverage its' institutional data to deliver a manageable access control platform.  80 users being able to deliver 14,000 access control changes a month while only having to make 570 manual changes is the crux of this value.  The web based interface means that many of those 80 users are non technical and could control access to their resources easily.  Prior to using grouper providing access control to 23 systems would have resulted in much time consuming work for administrators, grouper has removed much of that work.

An example of how being able to easily management complex access control groups delivers real benefit is providing student access to Microsoft Dreamspark.  Microsoft provide the Dreamspark offer which enables STEM students to use most of their software for free and for Arts students to access some of Microsoft's development software for free. Staff teaching or supporting IT for those students also get access.  While these rules are easy to write in English they are not traditionally easy to implement in access control systems. Grouper enabled the university to setup a simple STEM access group with science students, teaching staff and IT support officers in it. We then granted access to the STEM offer based on that group. The setup involved manually adding 39 memberships to the group, this then resulted in 16,000 STEM users being granted access.    Prior to using grouper manual registration had meant only around 300 users had access, post grouper 16,000 has access.  As a result of the changes grouper enabled  Students have downloaded over £4 million  worth of software for educational use (~$6 million in USD) .  Simple, manageable, scale-able access control  delivers real benefits to a university.

2012 brought a number of new developments with the use of Grouper at Newcastle University.

The main development was the provisioning of groups from Grouper into our Active Directory. Prior to 2012, we only provisioned a select number of groups into the AD on a case by case basis. In April 2012 the decision was made to provision all groups that reside in our Application stem within Grouper into the AD. There were a number of reasons for doing this, first of all to improve the resilience of Shibboleth querying group memberships from Grouper (previously Shibboleth queried the Grouper database directly). The second reason was to extend the use of groups past controlling just web resources, so now a group could be set-up which controls access to a wiki, blog, filestore and so on.

We now provision over 6000 groups into the AD, made up of over 150,000 memberships, and these numbers are continually increasing as new use cases are identified.

One of the main projects in 2012 at the University has been the restructuring of the University's central services filestore service and how access to the filestores is controlled. Previously administration for filestores involved administrators manually updating access groups membership lists, which often meant that as staff moved departments or left the University, their access was not updated. With the use of Grouper this has now changed, access to filestores is now based on departmental Grouper groups, with membership of these groups being automated based on the University's corporate data. This means as staff join/leave or move around the University they are automatically granted the correct access to filestores, dramatically decreasing the amount of administration required. The delegation of administration for these groups has now been passed on to the University's IT service desk, desktop support teams and in some instances individuals outside of the IT department, all through the use of the Lite Ui. This allows the end users to take control of who should have access to the resources, and allows IT resources to be channelled into development of new services rather than having to worry about maintaining group memberships. Access to over 400 network shares are now managed by Grouper groups.

Another project that has incorporated the use of Grouper is work around "hot desking" and ensuring that staff members have access to the applications they require wherever they work. Our application support team have created over 40 groups representing different applications such as Skype, Filezilla, with departments/individuals assigned membership to these groups. These groups are provisioned into the Active Directory so that they can be used with the deployment of Microsoft's App-v and RDS so that applications follow the user.

In 2013, we hope to upgrade Grouper to a more recent version (currently using 1.6), and with this we hope to take advantage of PSP to allow for real time provisioning to our AD. We are also keeping a keen eye on the development of a new Grouper Ui!

Any progress over 2013 will be added on this page!

Rampart with the Grouper web services - details of the configuration involved in enabling rampart with Grouper.

As part of a JISC funded project at Newcastle University called the GRAND project we have documented a number of use cases where we have used Grouper as a solution for the delegation of access control to different resources and systems.

Reading List System - using Grouper with a newly developed system by the Library for the management of course leader reading lists.

Syllabus Plus Room Booking Service - an example of using Grouper with a 3rd party application to provide a role based access solution for Newcastle University's room booking system.

As part of project work over recent years we have produced a number of screencast videos to demonstrate the use of Grouper and also the use of the data integration tool Talend to further extend the capabilities of Grouper.

New - Structuring groups in Grouper - This video discusses how we structure groups within Grouper to improve and demonstrates how the structure works and improves the delegation of access control.