These topics are discussed in the "Grouper Loader" training series.

The Grouper Loader allows you to automatically manage Grouper memberships based on a data source. See architectural diagram.

To find out if Grouper Loader jobs are executing successfully, use Grouper Diagnostics.

Here is an example of Grouper Loader being used to automatically manage Grouper memberships based on a data source.

You should run the grouper loader all the time for any Grouper deployment.  It also runs background tasks even if you aren't automatically loading groups.

Penn is using it in production to load membership for groups, and for groups of groups (in Penn's case, org lists). 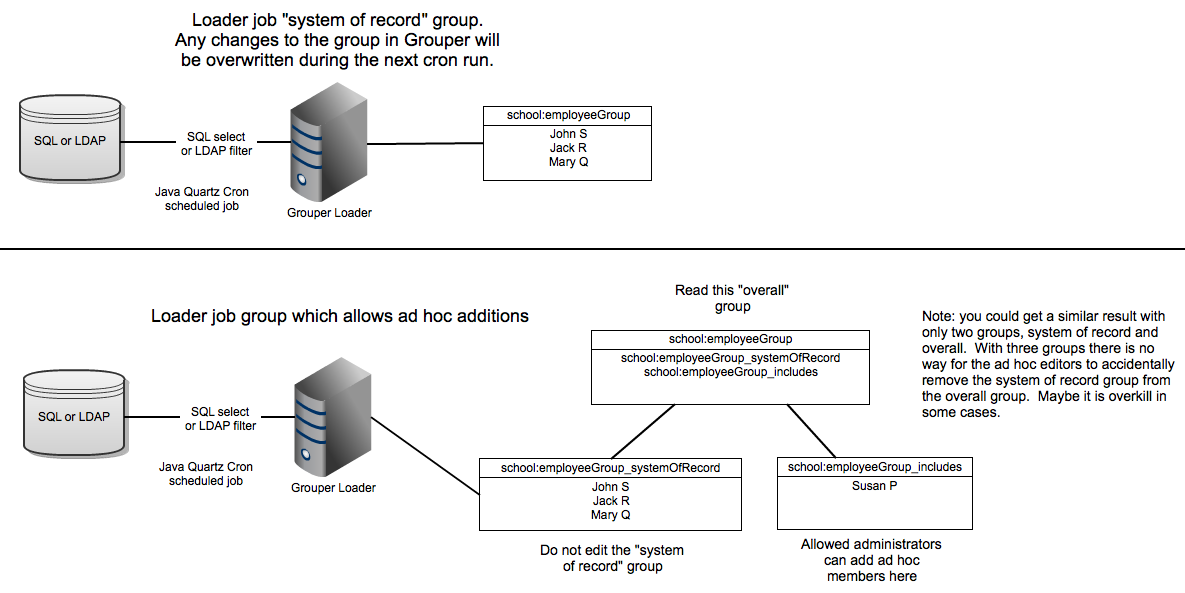 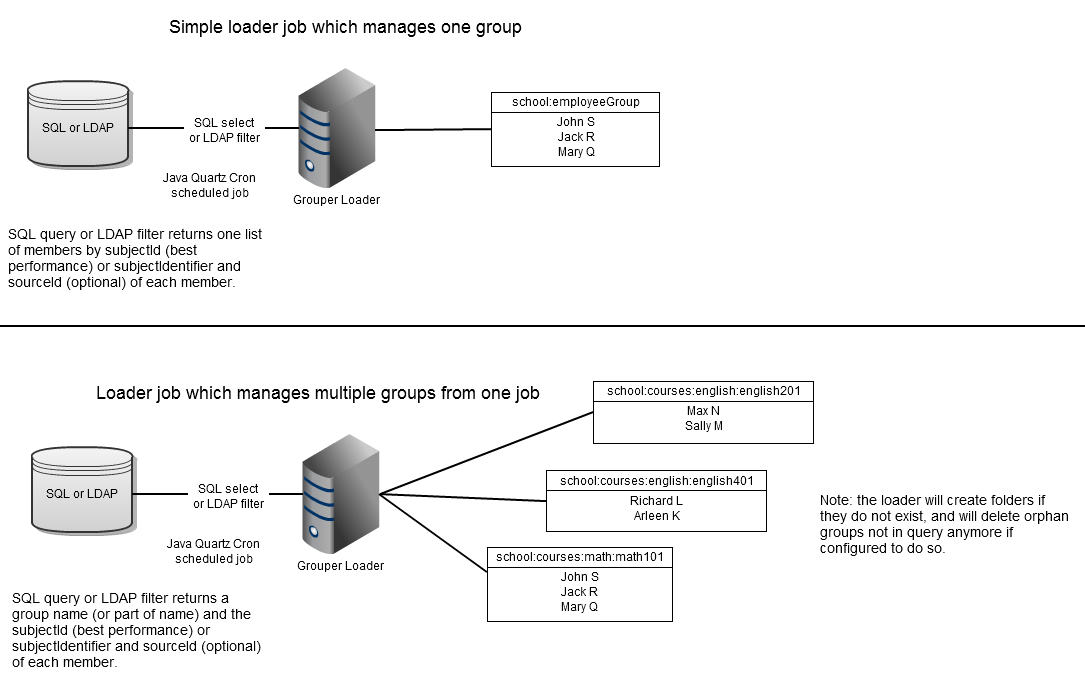 One-time setup in your Grouper database

To make a dynamic (loadable) group, first you need the correct metadata in Grouper. The easiest way is to set the grouper-loader.properties key loader.autoadd.typesAttributes to true.  If you don't want to do that, then here is the setup in GSH:

Note that a loadable group has the type "grouperLoader", and there are some attributes that you can set about the group:

This defaults to CRON if there is a value for grouperLoaderQuartzCron (see below), else it defaults to START_TO_START_INTERVAL. Note that a job will not start if a previous run has not finished.

You can also use the UI, here are screenshots (obviously these need some work).

The first time you run, it will probably fail, and give you DDL in the logs to run in your database (to add a couple of tables).  Run the scripts and you should be all set.

This will kick off as a command line program that you will want to run as a service.  This process will be always running, and the scheduler will schedule the jobs.  You should monitor the process with a monitoring tool like nagios or whatever you use at your institution so that you know when it is not up.

You can also run a one-timer via gsh.  This is useful to run once at the beginning, and not have to wait for the schedule.  Or to troubleshoot e.g.

Note that as of Grouper 2.3, if you create a new loader job, you can have it scheduled without restarting the daemon by using an option in the New UI.  If you're an admin of the group, under "More actions", there's an option named "Schedule loader process".  This option can also be used if you change the loader's schedule.

If you are using the loader to load hierarchies where groups are members, then you need to have a query which has the column SUBJECT_IDENTIFIER with the group system name, or SUBJECT_ID with the group uuid.  Useful for org charts.  See this example

Logging of jobs in DB

Each job (and subjob if the job manages multiple things) will have an entry in the grouper_loader_log table.  This will show the following information.  This can be used to tune performance problems, see which jobs have unresolvable subjects, verify that jobs are running, etc.

create the security group in gsh

make sure subject not wheel

start the loader to init the attributes (command line)

login to UI as test.subject.0, Try to add grouperLoader type to group, and get this error:

In the UI see that the type is not assigned.  Check the DB if you don't believe:

Verify the SQL, when I look in grouperSql.log, I see these SQLs:

Note, you can look in the table grouper_qz_triggers and grouper_qz_job_details for more info

If you get errors about a database quartz job, you can unschedule with (or whatever the trigger name is):

These are the default settings: