COmanage Groups (CO Groups) are defined at the CO level, and CO Group Memberships attach to the CO Person. CO Groups are fairly basic, for more sophisticated needs COmanage can be connected to Grouper using the Grouper Provisioning Plugin. By default, any CO Person can create a new CO Group.

An open group is one that allows anyone to join. Participants can self-join, no administrator action is required. Memberships in a closed group can only be set by the group owner.

In addition, CO Administrators can manage any CO Group within their CO.

Automatic Groups are those which Registry automatically manages the memberships of.

A group member is simply a participant in the group. A group owner has permission to add and remove members to and from the group, including closed groups. A CO Person can be a member, and owner, both, or neither.

The CO Person who creates a CO Group is automatically set as both a member and owner of the new group.

As of Registry v3.2.0, CO Group Memberships can have Valid From and Valid Through dates attached. See Registry Validity Dates for more information.

CO Group Memberships can be added as part of an Enrollment Flow by adding an attribute of the appropriate type. For more details, see Registry Enrollment Flow Configuration.

CO Group Memberships can also be added via Organizational Identity Sources when connected to Pipelines.

To nest a group, edit the target group and click

Nested Groups do not imply any sort of hierarchy (CO-1223).

Nested Groups are not designed to scale to very large groups, and in particular manual reconciliation of a very large group with one or more Nested Groups may be problematic. The exact threshold will vary according to the specifics of a given deployment. Deployments experiencing problems reconciling large groups may wish to consider a solution such as Grouper.

As of Registry v4.0.0, it is possible to apply boolean operators to Group Nestings. The configuration takes place in two places: 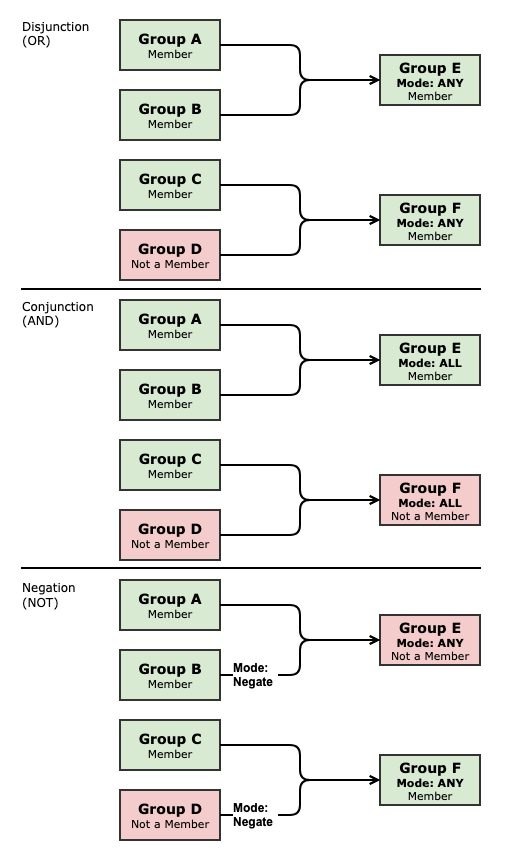 Group Nesting honor CO Group Membership Validity Dates. If a Membership is not yet valid or has expired, it will not propagate to the Target Group.

When a CO Group Member valid from or valid through date takes effect, Group Nesting changes will not automatically happen. The ValidateGroupMember job must be used to process these changes.